It won’t be until 2025—11 years after the last peak—that global service market revenues again will make it back to the $920-billion mark seen in 2014, according to a recent report from Rystad Energy.

“This will be the longest slump faced by the oil field services industry since the 1980s, with about $2.3 trillion in revenues lost along the way,” said Audun Martinsen, Rystad Energy’s head of oil field service research.

“On the bright side, in only 3 years’ time, activity levels will be higher than they were in 2014, although the cost cuts achieved in the sector means spending levels will only be 80% of what was seen in that peak year,” Martinsen said.

The recovery will be spread unevenly between the segments, Rystad noted. 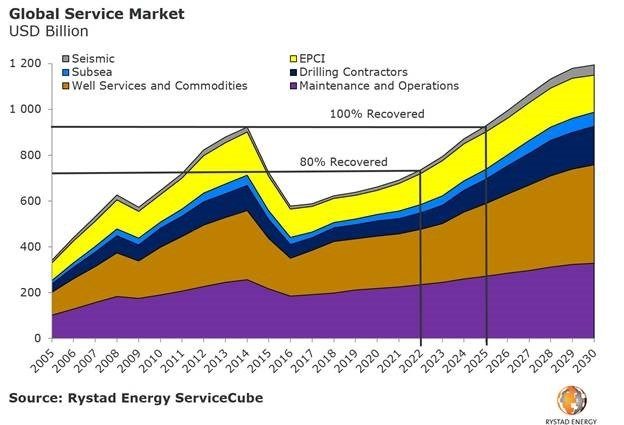 The floating production, storage, and offloading vessel leasing sector has seen the quickest recovery, emerging from the downturn relatively unscathed. It is forecast to be back at 100% by 2020.

The pressure pumping industry in North America is only likely to reach 100% of its previous peak in 2023.

The offshore drillers and seismic contractors are not expected to see full recovery until 2027.

“As for the offshore market, we expect recovery to be slower than for onshore and North American services. The offshore market bottomed out in 2018, and it will take some time to turn around fully, as capital investments are ramping up slowly and some cost efficiencies have yet to be realized,” Martinsen said.