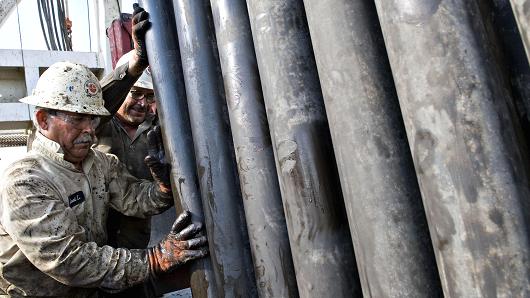 Oil and gas producers focused on drilling a major shale field in South Texas saw their shares sink on Monday as Tropical Storm Harvey blew through the region.

Drillers in the Eagle Ford region ceased operations and pulled crews as Harvey caused devastating flooding and brought high winds along the Gulf Coast over the weekend. Several refineries in the area were also closed, removing about 25 percent of Gulf Coast refining capacity, according to S&P Global Platts.

"Given the enormous level of rainfall along the Texas Gulf Coast the past 3-4 days, we expect most operators in this area will experience near-term field level and/or takeaway issues," Capital One Securities analyst Phillips Johnston said in a research note on Monday.

Shares of Carrizo Oil and Gas were down 6.5 percent for the day. Drilling in the Eagle Ford accounts for about 75 percent of the Houston-based independent driller, according to Capital One Securities.

Sanchez Energy and Wildhorse Resources were both down more than 4 percent on Monday. Sanchez drills exclusively in the Eagle Ford, and Wildhorse depends on the region for about 72 percent of its total output.