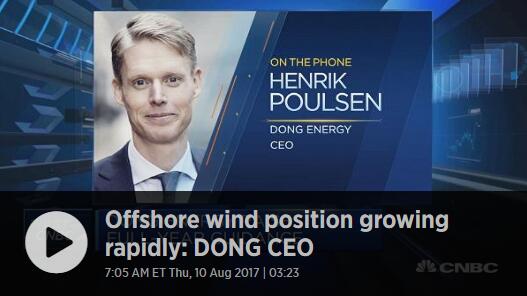 "I do believe what we've seen – especially over the last couple of years – is we've seen renewable technologies coming down very rapidly in price," Henrik Poulsen said.

"We're really seeing green technologies becoming very price competitive and that is also beginning to now materialise in some of the most recent auctions we've seen around the world," Poulsen went on to add.

Poulsen was speaking after Dong Energy, which is headquartered in Denmark, announced operating profit (earnings before interest, tax, depreciation and amortization) had increased by DKK 1.8 billion ($283 million), reaching DKK 4.4 billion in the second quarter of 2017.

Poulsen went on to add that we were now at an "inflection point." Renewable technologies, he said, had, "come so far down in price that we can build green energy systems for the future that are also quite cost competitive and price competitive for the consumers."
--News from www.cnbc.com

Pre:Oil rises 39 cents, settling at $49.56, after another big drop in US crude stockpiles